Following up 2007’s explosive debut cinematic outing of the Mattel toy franchise, it seemed unlikely that director Michael Bay could outdo himself the second time round. Doubts are put to rest in the form of a hulking explosion of action following Optimus Prime, Shia LeBouef and Megan Fox as they resist the evil Decepticon robots. It’s total Bay-hem! 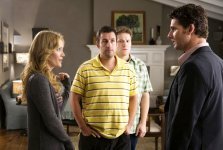 In this beautiful animation from the creator of The Nightmare Before Christmas, a little girl’s wish to escape her dull parents is granted when she discovers a secret portal to a fantasy world in her new house. But is this slightly sinister parallel world where people have buttons for eyes more than she bargained for? Find out in this vibrant and charming tale.

At a mere twelve years old, Natalie Portman's debut cinema performance in Léon as the young Mathilda is remarkably mature. The rebellious prepubescent's world is blown wide open when her family are killed by her drug-dealing dad's corrupt cop client (acting legend Gary Oldman). Desperate, she turns to mysterious neighbour Léon (French star Jean Reno) for help. He takes her in, picking up the role of a foster father as he goes along, and teaching Mathilda his skills as an expert assassin, so that together they might avenge the girl's family. An indisputable modern great.