Six films in one night! 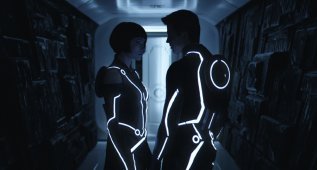 Abandoned by his father at the fragile age of seven, Sam Flynn (Hedlund) follows a mysterious trail which leads him in to the digital world his dad, Kevin Flynn (Bridges), helped create and which now holds the both of them prisoner. Kevin Flynn’s former ally and creation, Clu, has taken control and has begun to mercilessly hunt his creator in an effort to achieve his destiny.

The plot to 1982’s Tron may have faded from the memories of many who will be seeing the sequel, but what persists in the public memory is the world created by the filmmakers nearly three decades ago. The digital realm of gladiatorial arenas and Light Cycles, and of users and programs, has spawned a massive cult following and dramatically influenced the science fiction genre.

The first concept trailer was revealed back at Comic-Con 2008, and the years since have seen information fed through to the public at a torturously slow pace. This year though, we finally return to this lovingly imagined digital world, now fully realised with state of the art special effects, whilst brining a cornucopia of respected acting talent both new and old to the franchise. This spring, the game has truly changed. 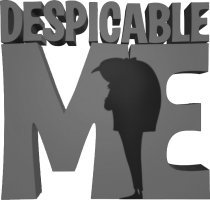 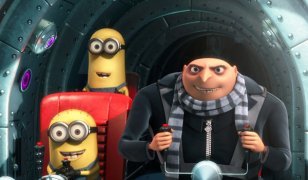 Within the family friendly category of animated films such as Monsters Inc. and Toy Story, Despicable Me stands out as truly off the wall. The story centres on a moon obsessed, Russian accented villain named Gru. Here’s the catch: Gru plans to steal the moon. If that doesn’t ring alarm bells for science loving nerds, then the undertone jabs at the economic climate are something to look out for. This evil genius does not work alone; in fact, help comes in the form of Minions, who are just about the wackiest and cutest little yellow absorbent pill-like creatures known to the animation world. Of course, not everything in Gru’s plan goes smoothly and just when you think the cute thermometer couldn’t soar any higher, in step three little orphaned girls. Desperate to use the girls to carry out his plot, Gru adopts the orphans.

Expect the script to be littered with brilliantly timed witty lines and a fair amount of slapstick. While a little predictable to the slightly older audience, the film’s original story certainly makes Despicable Me an enjoyable watch. 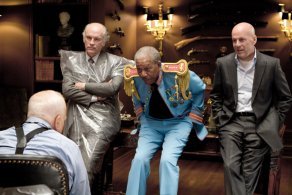 Frank Moses (Willis) is rudely brought out of retirement following an attempt on his life by his former employer, the CIA. With a price on his head, he urgently travels from state to state to recruit his ageing ex-comrades (Freeman, Malkovich and Mirren) to join his fight against a government conspiracy that goes all the way to the President.

Like last summer’s Expendables, Red is a proclamation from those over the hill that they’ve still got it, despite being old enough to claim a bus pass. The cast clearly enjoy playing a pastiche of the action genre, and revel in each other’s company: Malkovich as the paranoid crackpot, Freeman as the weary wisecracker, Mirren as the dainty but deadly madam, and Willis as none other than the action movie archetype he established long ago. Brimming with stunning set pieces, outrageous explosions, and a myriad of one-liners, Red is an entertaining celebration of everything that action films stand for.

CLICK HERE TO FIND OUT WHAT THE MYSTERY FILM WAS! 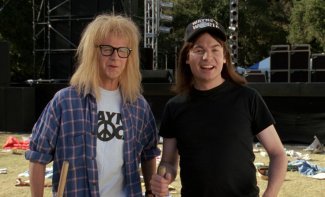 Wayne Campbell (Myers) hosts his own public access cable TV show with best friend Garth (Carvey). The programme's cult following prompts the interest of producer Benjamin Kane (Lowe). Attracted by the promise of big money, Wayne and Garth eagerly hand over the rights to their creation. However, this decision comes at a cost. Not only is Benjamin now running the show, he also has his eyes on Wayne's girlfriend Cassandra (Carrere). Will Wayne be able to get his show back, win the girl and save the day?

Wayne's World has rightfully become a cult classic. Before Mike Myers became a time travelling secret agent or a green ogre, he was the endearingly silly host of a cable access show. Filled with sight gags, one-liners, movie and TV parodies, celebrity cameos and catchphrases which quickly entered the cultural zeitgeist, Wayne's World is well worth seeing even if, like me, you've seen it a hundred times before.

If one needed any more proof of the film's cultural impact, can you imagine listening to Bohemian Rhapsody without headbanging furiously during the guitar solo in the middle? We have Wayne's World to thank for that, and so much more. 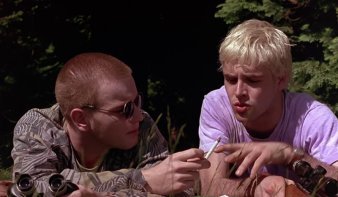 A classic of British cinema, Trainspotting depicts the wild antics and surreal escapades of Mark Renton (McGregor), a heroin addict attempting to wean himself off drugs but failing miserably under the influence of his friends. Manoeuvring between an affair with an underage girl and plans for a heist to buy more drugs, Renton finds himself questioning reality and struggling with his identity in a commercialised and predictably boring world. Adapted from the novel by Irvine Welsh, since its release Trainspotting has taken its place as one of the greatest cult films of the last 15 years.

Gritty, shocking, and somehow sublimely hilarious, Trainspotting manages to blend the madness and exhilaration of an unconventional life. Far from preachy, the film manages to draw the viewer into a world where drugs create the rules to the beat of an addictive soundtrack. Moreover, its effortless stylishness and warped depictions of reality bear witness to the creative genius of director Danny Boyle, who went on to direct Slumdog Millionaire and 127 Hours, in bringing to life eccentric and peculiar stories. Not unlike drugs, Trainspotting’s in-your-face and down to earth coarseness will knock you off your feet only to have you begging for more.