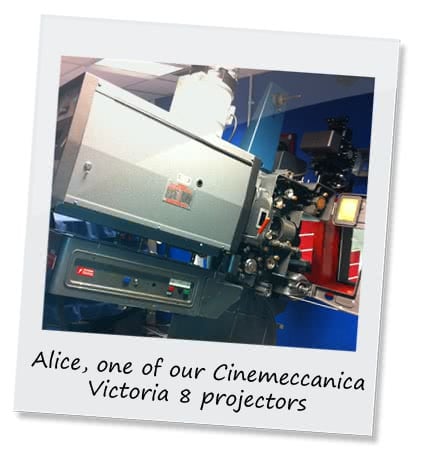 The first thing you should know about Warwick Student Cinema is that we do not show DVDs, Blu-rays or any other home cinema format media to our audience in L3. Only industry standard equipment is used; this means either showing either real film – both 35mm and 70mm – or DCI compliant digitally-projected movies.

Unlike many other cinemas – even those still able to show 35mm or 70mm film – Warwick Student Cinema usually uses a changeover system when running shows from these formats, in which two projectors are used alternately. Films are transported on spools of about twenty minutes each. A typical feature will have six or seven reels. One reel is played on the first projector and at the right moment at the end of this reel, we switch over to the second projector and so on. This moment is indicated by marks on the film (as made famous in Fight Club!) known as ‘cue dots’, which appear in the top right hand corner of the image. There are two sets of dots; the first is approximately eight seconds before the end of the reel and indicates to the projectionist when to start the film moving through the second projector. The second set, about seven seconds later, signals the time to shut off the first projector and begin showing the next reel of film. This results in an almost seamless changover that you, the audience, should not notice. 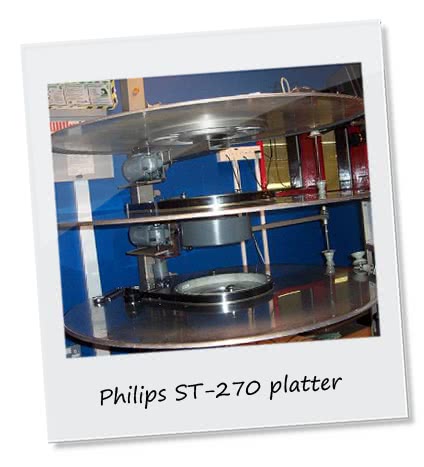 Not only are we able to project standard 35mm film, but also our projectors are capable of handling 70mm film. We are the only student cinema in the country capable of showing 70mm and one of only a handful of cinemas in the UK who show 70mm film on a regular basis. This provides an improved picture due to two reasons: firstly, the film is often in better condition than a 35mm print – as it will have been played far less – and secondly, because the film is larger, meaning the image is magnified less than 35mm.

Warwick Student Cinema is also able to operate with a long play system. This involves, in our case, a platter which was kindly given to us on permanent loan by the Projected Picture Trust in 2002. The platter consists of three giant plates, each approximately 54 inches in diameter. The entire film is spliced together and placed on one of the plates. The film then makes its way to one of our Victoria 8 projectors (from which it is projected on screen) via a circuitous route using a series of rollers, before going back to one of the other plates. This is particularly useful in the event of one of the projectors failing, an event which previously would have resulted in the cancellation of the film. Also, unlike any other playing system, films can immediately be shown again due to the fact that the film uptake is from the inside of the reel. 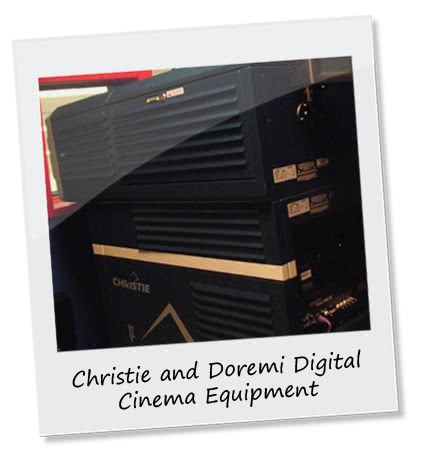 Our society is also lucky enough to have installed the first 4K RGB laser projector in Coventry and Warwickshire, in February 2020. Unlike traditional cinema projectors (both digital and film), its light source comprises red, green and blue laser modules instead of a xenon arc lamp. This cutting-edge illumination technology facilitates superior black levels as well as a wider colour gamut to provide the best picture possible. The 4K resolution provides a four-fold increase in picture detail compared to standard 2K systems.

The digital projector – a Barco SP4k-15 – is adapted for use with its B-mount high contrast lens and has an ICMP-X installed, which combines the roles of a digital cinema server and alternative content processing (such as the pre-film slideshow). Naturally, our digital projector does not operate using a changeover system as there are no reels of film to change over. Instead, the film arrives at the cinema on a hard drive, or is transfered electronically onto one of our film transit servers. The film, stored in a format known as DCP, is then ‘ingested’ (uploaded) to the digital projector server; this takes about three-quarters of the time taken to play the whole of the film. A playlist on the server is then created, which includes auditorium automation (lights, moveable screen masking etc.), pre-film trailers and – of course – the feature film. This automation takes a lot of pressure off of the projectionist on the night!

The picture is only half of the cinema experience, the other being the sound. Warwick Student Cinema can play up to 5.1 surround; left, centre and right channels provide precise and clear positioning of dialogue, separate left and right surround channels help provide the feeling of immersion in the sound and give general atmosphere and finally a subwoofer/bass effects channel produces extra strong bass sounds which are particularly audible in action and special effects sequences. All our amplifiers are THX certified, as are our surround and subwoofer speakers. Our left, right and centre loudspeaker stacks are not an off-the-shelf system and were custom assembled from components by WSC (carefully chosen to best work with the space in L3) and so have no manufacturer THX certification as a whole, but only high-quality components specified elsewhere in THX-certified systems are used.

Digital films all have a standard LPCM sound format, which is entirely uncompressed and lossless in order to give the highest quality audio possible. From film, we are capable of playing all industry-standard sound formats; this includes all three major digital systems – Dolby Digital, Digital Theatre Systems (DTS) and Sony Dynamic Digital Sound (SDDS) – as well as the older analogue formats. Analogue sound on 35mm film is usually recorded optically and comprises the single-channel mono format as well as the stereo and analogue surround sound Dolby A and Dolby SR formats. 70mm film is presented with either fantastic six-channel Dolby magnetic sound or crystal-clear DTS digital sound. Magnetic sound on 35mm is rare – but we can play it if the need arises!

When showing either 35mm or 70mm film, the sound readers pick up the information on the film print and send this to the relevant processor. For most formats this is the CP500, which can decode mono, Dolby A, Dolby SR and Dolby Digital sound – all of which share a combined reader built into to the Victoria 8 projectors. The DTS and SDDS systems both consist of separate readers (which are bolted onto the projectors as required) and processors.

All sound is fed into our AP20 sound processor; when projecting film this will come from the relevant film sound processor and for digital shows this will come straight from the digital cinema server. The AP20 allows us to make adjustments to volume etc. and the Dirac Live 2.0 processing specially optimises the audio based on measurements of how sound behaves in L3, ensuring that all of our shows sound as good as can be. After processing, each channel of output goes into its own amplifier, which together provide more than enough power to drive all of the speakers around the auditorium.

But it is not just a crisp picture and clear sound that makes projection at Warwick Student Cinema what it is today. All of this equipment would be useless if it were not for the steady stream of dedicated technicians who maintain the equipment and for the projectionists who run it. These people all give up their time to first be trained and then, in turn, take on the task of training subsequent generations. 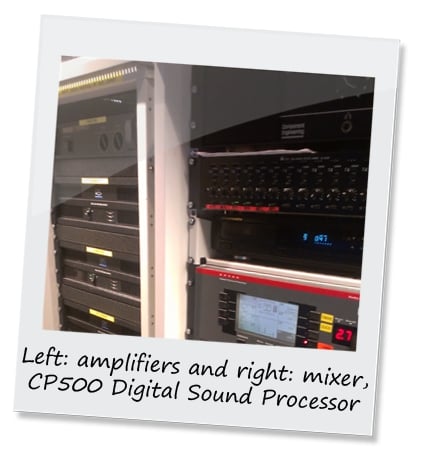